ImproVIBE is the first and only Improv Comedy Theater training center in Greece, based in Athens. 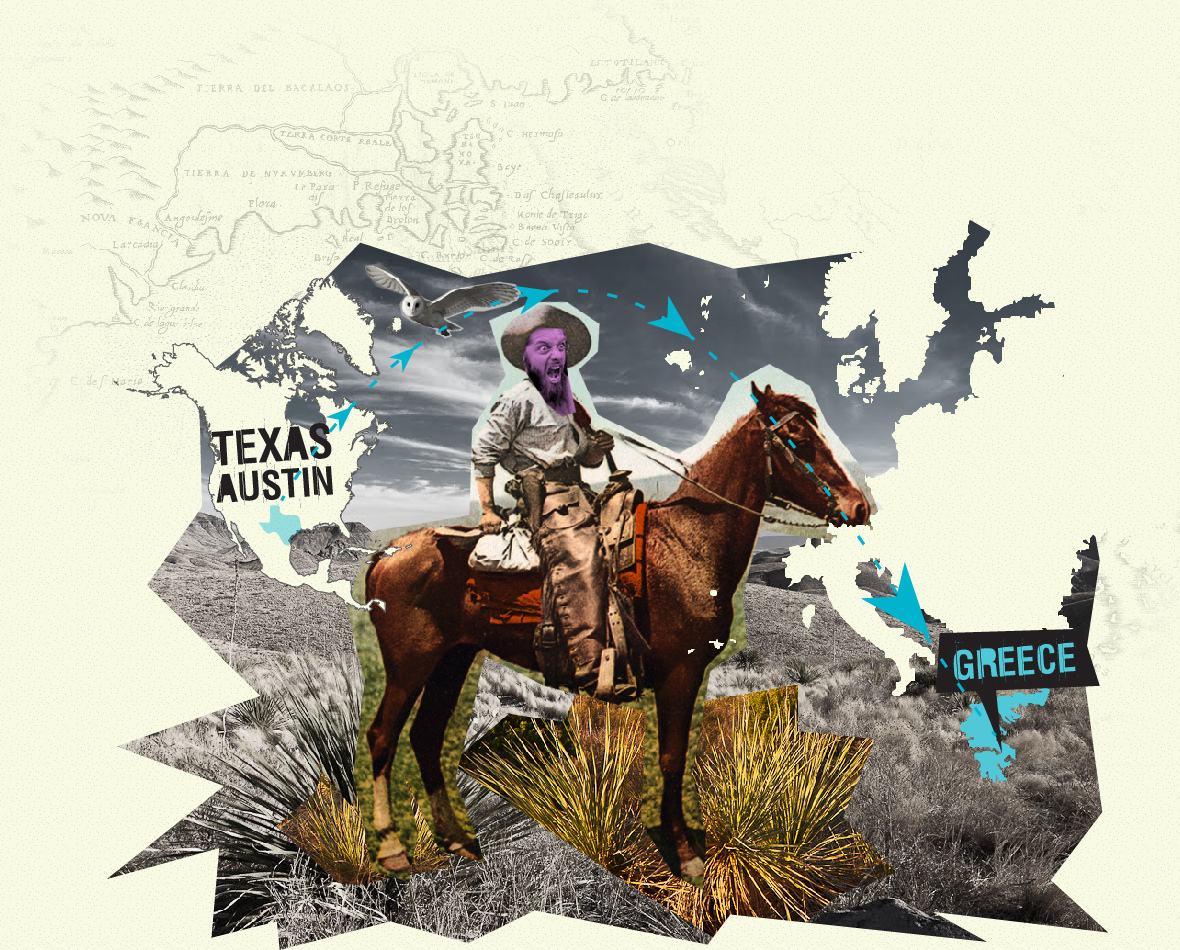 Founder and artistic director is Menelaos Prokos. During the number of years he spent in Austin, Texas of the USA, he got heavily involved with the art of Improv Comedy Theater. Having traveled around the world for more than 13 years, in 2012 he decided to move back to Greece. He searched for Improv, yet he found no Improv. He desired Improv, so he decided to teach Improv.

In fall of 2012 ImproVIBE was born and has been rocking the house with classes and shows ever since. 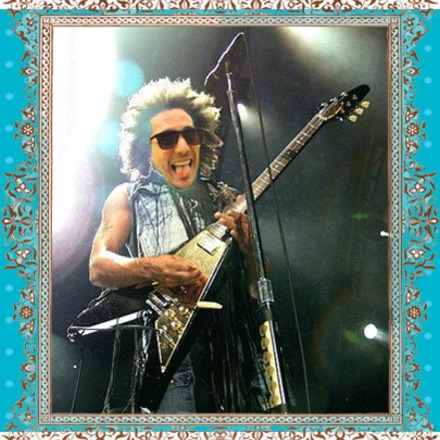 The methodology behind Improv is based on thinking less and trying less. Instead, it's all about reacting naturally to the piece of information you have just received. By default, it transcends the boundaries of a theater stage and affects the way we handle everything in life.

Improv is not just theater. It becomes a way of life.

We teach the art of putting Play back in your life and enjoying much more anything that you do. We teach how to take risks and celebrate the occasional failure. We teach how to let go of control and allow yourself to be affected and be changed. The tools we use to entertain audiences, to create theater on the spot and to make the obvious seem like a stroke of genius is exactly what we will teach you in order to be able to operate in a more fun and effective way.

Improvisation is spontaneous entertainment, creativity, fun and freedom! We invite you to discover it! AND YOU SHALL BE TREATED COOKIES FROM SMIRNI 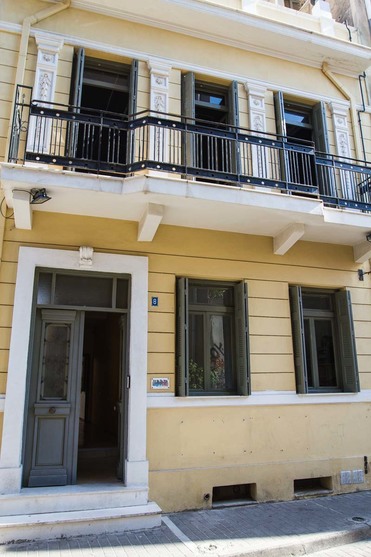 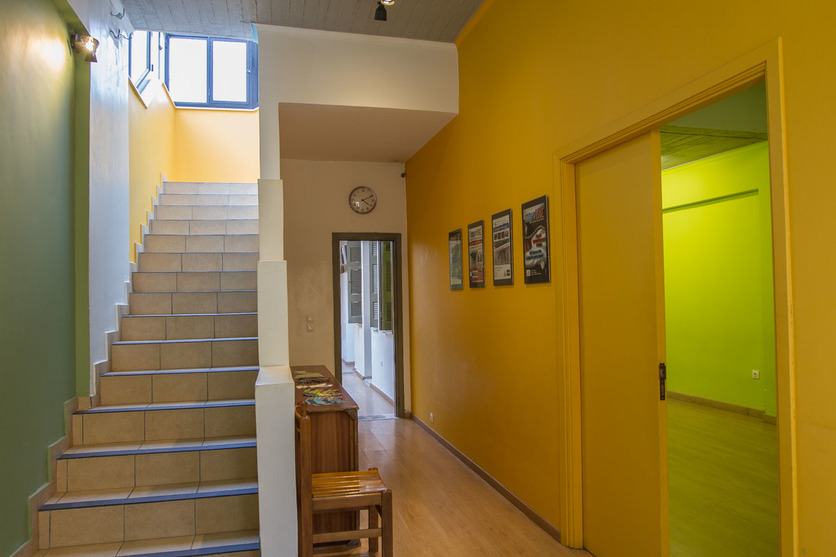 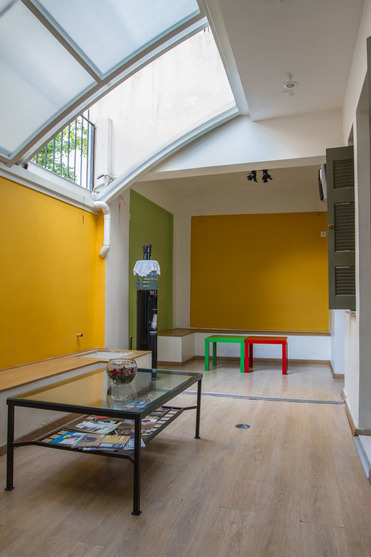 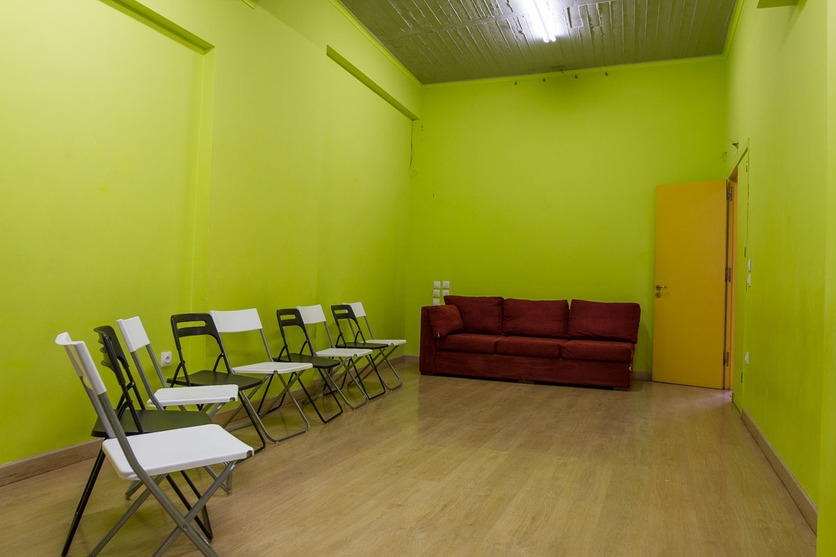 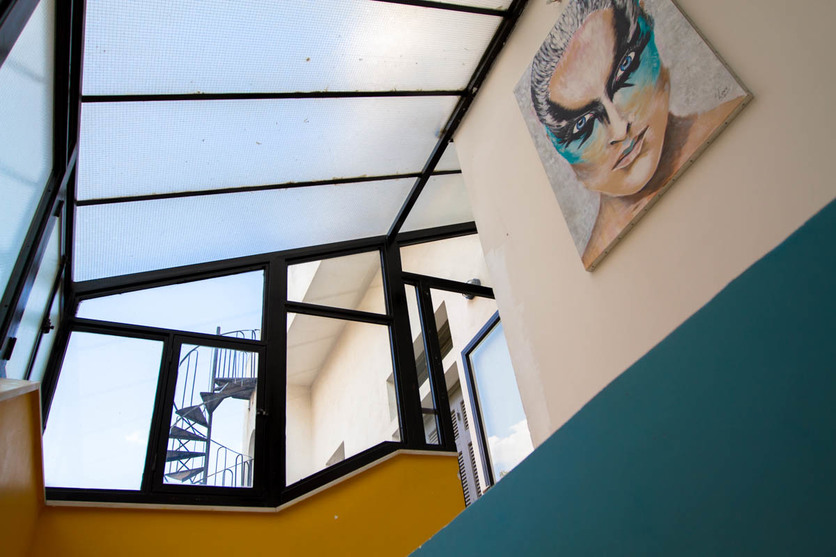 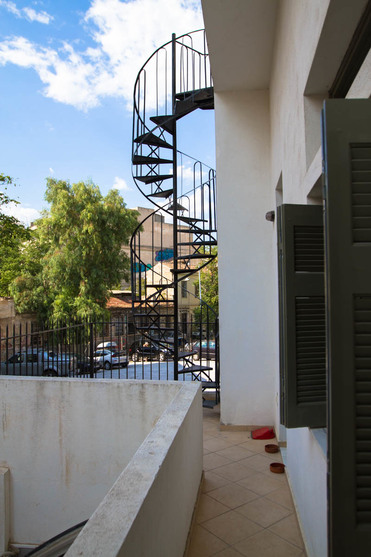 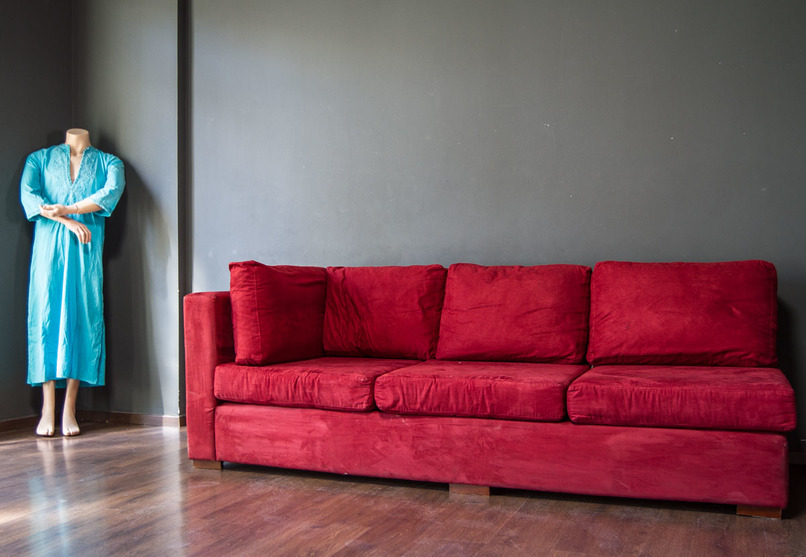 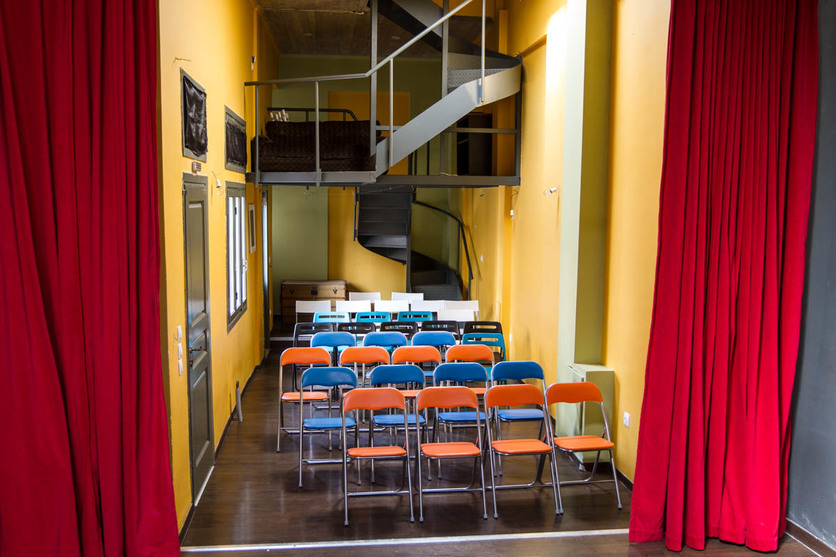 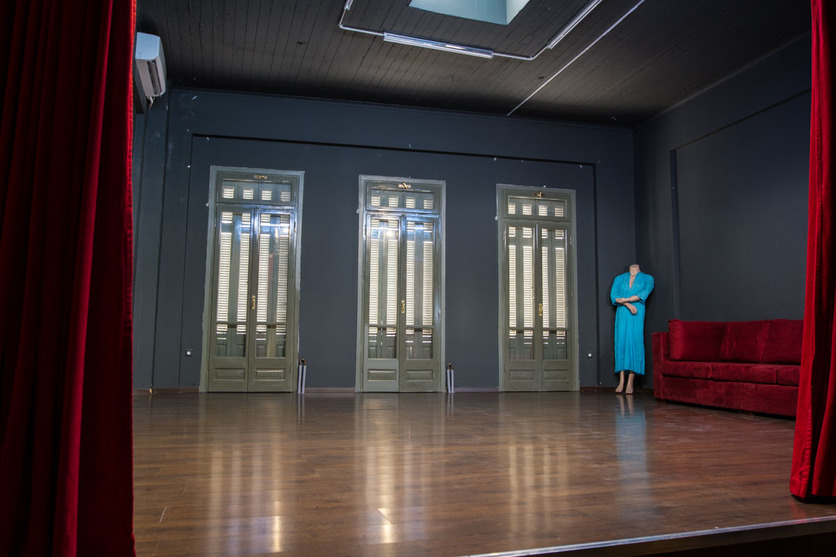 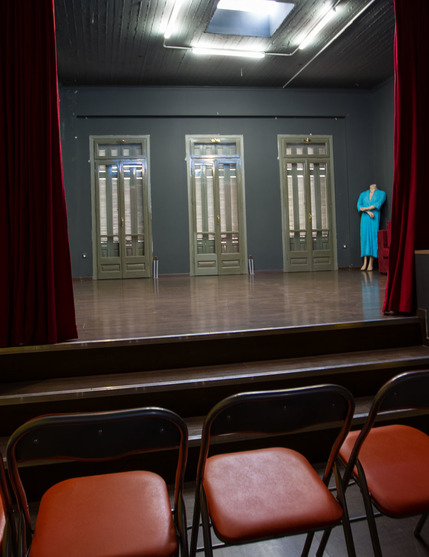 Menelaos Prokos is a theatrical improviser, instructor, photographer and life-long traveller. During the 13 years he spent traveling around the world, he settled in Austin, Texas for three years, during which he got neck-deep in improvised theater. He trained with three different theaters and took part in many Improv Theater productions there. He was amazed by how passionate this art form is and the way it broadens one’s imagination and gets them laughing like little kids for hours.

It was the logical (but utterly unexpected) next step to move back to Greece and found ImproVIBE, the first Improv Theater school in Athens and the whole of Greece. He is also the producer of Mt Olymprov, Greece's International improv Festival, that has been running successfully and growing since 2016.

Many years ago he obtained a degree and an MSc in a field that he detests, has worked as anything from translator for a large international financial group to sushi chef at a super market (and everything in between), has lived in 5 different countries on 4 continents, and has ended up in the hospital a number of times.

He is heavily involved in applied improvisation, working with companies from all around the world. Outside of Greece, he has taught/performed all over Europe, as well as USA and Colombia. He is able to teach in Greek, English, Spanish and French.

His teaching primarily focuses on acting natural, adding fun and realism that comes directly from the heart, and pushing the students towards enjoying everything they do on stage. He strongly believes in creating emotional improv with a purpose that goes beyond the quick joke and has impact, not just for the audience but for the performers as well.

When not swimming the improv seas, he spends most of his free time cycling, playing escape room games, learning how to play the violin and cleaning up the mess his dog makes.

Once upon a time, and more specifically during the winter of 2014, Panagiotis took his first Improv Theater classes, starting with Zissis Roumpos, and immediately after at ImproVIBE. One day, and while still a student at ImproVIBE, he receive a terrifying phone call. Although he watched their professors's improv show every Friday, this week he was going to be in it.

That was the beginning of it all, as, from the moment on, he was in love with improv and with the stage. He began participating in international improv festival, absorbing knowledge from some of the best improvisers from around the world, and participating in all kinds of shows. When he completed ImproVIBE's training program, he was ready to take his first steps in teaching as ImproVIBE's core teacher member.

At the same time, he started participating in theattrical plays. Yes, scripted! His goal is to share his knowledge and experience from all these shows in the world of improv and to show how important and useful improv is to everyone.

Dan entered ASOEE university but quit after the first semester because he took 4 classes, out of which he excelled at 5. He worked at an advertising agency for two years as a script writer, where he got involved in video production and decided to study directing.

He left Greece, moved to the UK, had 37 different jobs while studying and was very close to starting a career and a street cleaner in Cambridge (it was a wonderful job). He came back when he was 24 and signed up for various workshops for actors in order to familiarize himself with the training they receive. Well, guess again. He got jealous, wanted a taste of that by getting out of the director's chair, so after a couple of years he joined ImproVIBE's training program.

At the same time, he worked at the Museum of Emotions, a magical place where, as a trainer, he taught emotional awareness classes to kids 4-15 years old.

Dan doesn't quite know what he wants to be when he grows up, but working with groups of people is something that fascinates him. He loves to play the piano, the drums and anything that produces a sound, really. He writes, sings, talks a lot, thinks even more, and doesn't eat much.

You'll find him teaching improv classes here at ImproVIBE, not only to adults but to kids as well. Oh, and ask him about his friend Kozak.

Konstantina Skourti is a young woman who gives her own struggle not to face with procrastination anything that asks her to describe herself.

She was born in Athens and after the age of six she lived in the distant and exotic Corinth from where she left for her studies in Ioannina. She received a degree in Greek literature, tsipouro and the cheapphilosophies that come with it. Returned to Athens in 2015, where she studies and creatively works with children, while she voluntarily offers Greek lessons to those whose Greek is not their mother tongue.

Met theatrical improvisation and ImproVIBE in 2017. She started out of sheer curiosity but soon found herself loving it and completing, without realizing, all seven levels of school. Loves Musical Improv and music in general. She is a member of the improvised group Improvates, a team that acrobatizes between the next bite and the next show. Whatever comes first!

She returns to ImproVIBE in another position this year, where she will be welcoming the new students of the school and recognizing the joy of the unknown in their faces. Saying that, she just felt the need to quote a phrase from the movie Dead Poets Society:

Maria Avliti has graduated the School of Architecture at NTUA (National Technical University of Athens) and she runs various projects seemingly irrelevant between them, but all of them having the feature of creation as a common denominator. She dedicates herself to music and singing, designs and decorates children's spaces, she also illustrates children's books. She loves spanish language and culture, systematically works on creating an interactive learning method for adult students, and never stops exploring it through seminars and trips. She decided to become a member of Improvibe's crew, mainly because she wants to introduce to Noise her little doggy Menta who, incidentally, is at the ideal age for marriage!

Currently, she is busy raising her newborn daughter, so we'll be missing her for a while!

Noise is ImproVIBE's mascot. They are both of roughly the same age and are both a little bit crazy.

He always makes sure to let us know if someone he does not know is approaching our front door. He also acts as a welcoming committee, since the very first thing you'll see once you enter the door is this snout. Nowadays, he has a friend called Menta, Maria's four-legged daughter.

He's the best dog in the world. If we could, we'd get him to teach improv.